How would Brexit affect the Medway property market?

One of David Cameron’s key election pledges was to hold a referendum on Britain’s EU membership. That pledge is now a reality as we are likely to have the referendum later this year or possibly in 2017, depending on Cameron’s negotiating ability in Brussels. What could breaking away from the European Union mean for Medway rentals?

Reneging on our EU membership may reduce demand for housing as more skilled workers decide to relocate back to Europe. This would be especially prevalent in London and the South East as most European migrants choose to work in this area according to Carter Jonas’s research which can be viewed here. These skilled workers are renting from high-end residential properties, so demand for such accommodations is likely to falter and we could see a slowing down in rental rises or a reduction completely. At a time when the mortgage interest tax changes are being implemented between 2017-21, reducing rents could see some landlords being forced to sell up their Medway property as they are no longer profitable.

It is unlikely that low-skilled workers would be forced to relocate back to their home countries – at least not immediately. However, it would stem the amount of low-paid migrants coming into the country and therefore reduce demand over time for budget accommodation in Medway, such as Homes of Multiple Occupation (HMOs). Therefore, Medway HMOs and budget accommodation would still have a strong demand initially, but reduce in the years after a Brexit.

But perhaps more crucial than the actual results of the vote, as seen in the Scottish referendum, is that the uncertainty pre-vote will possibly have some investors holding back on major developments until the result is known. As you will have seen in my post a few weeks back here, there are a lot of new homes coming to the Medway property market this year and in the upcoming years. So pre-vote anxiety may not have such a stranglehold on investment in Medway but have more of an effect in the London areas. 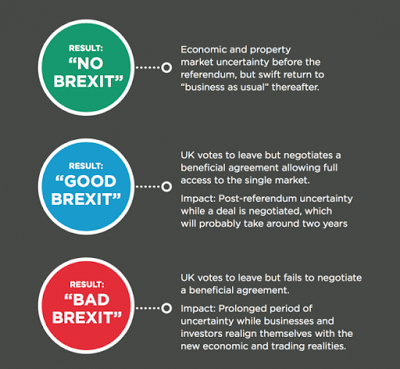 If Britain did exit the EU, we would go through a series of trade negotiations with other EU members; while waiting for the results of these there would likely be further uncertainty. If beneficial trade deals were agreed, then the UK property market would recover quite quickly. However, if no beneficial trade deals are agreed this could have a damaging effect on the rental market. Fewer foreign students would be coming to study here and therefore demand would be reduced for Medway HMOs at and near the Medway University Campus. On the other hand, a vote to stay in the EU would bring a swift recovery to the market and the return of certainty.

I hope you enjoyed reading this blog article. Let me know your thoughts on what Brexit could do to to Medway property, my email is hasan@home-share.co.uk. Subscribe to the Medway Property News blog for more information on what’s happening with the local property market.