Hello readers. The days are definitely getting colder as we head towards the end of the year, and many people thought that the Brexit vote would make the housing market follow a similar chilly fate. However, as new figures show, it seems that the Brexit thaw has started.

New data from the Bank of England says that 67,518 home loans were approved in October, up from 63,594 in September – that’s the highest number since March.

It is now at a similar level as 2015. Consumer confidence also seems to be improving as the Bank of England’s data also shows that consumer credit surged in October, up £1.62bn, taking the annual growth rate to 10.5%, the strongest level since October 2005.

Supporting this data, the latest figures from moneyfacts.co.uk say that the number of fee-free deals has more than doubled over the past year.

These latest figures reveal a definite increase in the number of fee-free deals available for those looking for a fixed rate-mortgage.

This shows a rapid growth in this sector of the market, with there now being 606 more fee-free deals on the market than there were this time last year.

The Nationwide Building Society has also released its Nationwide November House Price Index Report, which says that over 95% of new mortgage deals to first-time buyers are fixed-rate mortgages.

In addition to this, Nationwide reports that annual house prices are still growing but slowed slightly to 4.4%, from 4.6% in October. House prices have also increased by 0.1% month-on-month in November.

Of course as we get closer to Article 50 being enacted to leave the EU, it heralds potential further uncertainty in the market – which could lead to consumer confidence waning.

In Medway, taking Chatham as an example, the latest figures according to home.co.uk show that house prices have increased. 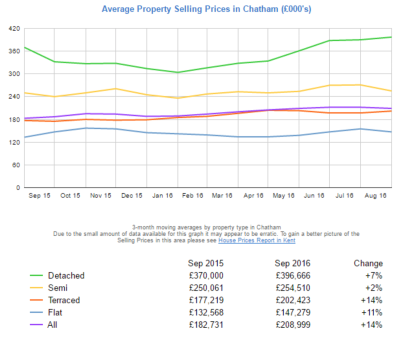 As we can see, prices of terraced houses stormed ahead of the rest of property types, increasing by 14%; this shows that HMOs in Chatham do offer good capital growth. Flats also showed significant growth, increasing by 11%. Therefore if you can find flats or terraced properties in locations offering good cashflow then there is the potential for sound investment.

The number of houses and flats sold has gone down, meaning such investments are harder to find. 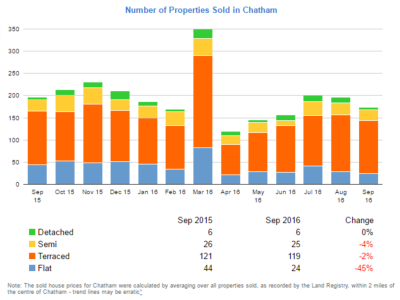 As you can see from the blue section, flats had the biggest decrease – having dropped by 45%. So, it may be best to stick with terraced properties: they should be easier to find and offer significant opportunities for a strong investment strategy.

It will be interesting to see what the figures look like for November, based on the new data from the Nationwide.

Related: Letting agents and landlords affected by the Autumn Statement 2016

Overall, taking all this into consideration, it still looks like investing in property will bring you a good return, especially as a HMO, where the yields will remain good despite the additional regulations that have been brought in by the government.

If you need any advice on a rental or need a property sourced – please feel free to contact me. My email is hasan@home-share.co.uk and you can ring me on 07944 726 676.