Hello readers. Well, yet another crazy week in politics has been and gone.

Who would have thought that there would be a general election in June? It will of course follow soon after the local elections in May, so it’s all going on right now. But, before we talk more on that, here’s a quick reminder on the latest Property Vault being held in Medway.

Tickets are available now for the next Vault, taking place on April 25th, 2017. Our guest is Lloyd Girardi, who co-founded White Box Property Solutions Ltd in 2014.

​White Box Property Solutions Ltd is an award-winning property investment company based in Northampton. In December 2014, after being in business for less than a year, the company won the prestigious Progressive Property Millionaires Club ‘Deal of The Year’ award for its development in St James, Northampton.

I look forward to hearing from Lloyd about his experiences, and seeing you there for the usual mix of networking and discussion.

You can book tickets on the Property Vault website.

Back to the general election!

Clearly Theresa May was confident of her party’s position in the polls to call this snap election. But does her decision cause confidence in the housing market?

Many serious talks in various areas are put on hold where possible while elections are taking place, as they can create uncertainty. However, taking last year’s Brexit uncertainty as an example, we saw that demand increased and bounced back once the major brunt of initial talks were done. 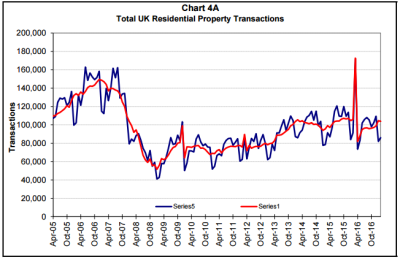 For example, you can see in the above chart that long-term movement in the number of residential property transactions reflects the general performance of the housing market over the past eleven years.

In May 2005, 2010 and 2015 there were market dips when elections took place, which were generally followed by renewals of performance. This is normal.

However, plenty of other factors have affected transactions, such as the Credit Crunch at the end of 2007, and the Stamp Duty holiday in December 2009 – both of which had a more dramatic effect on housing.

On a positive note, the time period of campaigning for this general election is shorter than usual, meaning it should keep uncertainty to a minimum.

On a less positive note, the Department of Communities and Local Government has confirmed that the consultation on the proposed ban of letting agents’ fees imposed on tenants in England will continue as before. The closing date is June 2nd, just under a week before the general election.

I recently mentioned the Medway Local Plan consultation, which looks at proposed homes and infrastructure changes for the area – all of which is a requirement of government upon local authorities. Medway Council has announced that the deadline has been moved to 5pm on May 30th, 2017.

Plans include creating a new town at Lodge Hill, regenerating Medway City Estate and Chatham Docks. In addition it also includes the four regeneration options set out in my recent blog post.

As I have mentioned before, any improvements to the area are good for investors and landlords as it increases desirability and therefore bolsters returns on investment.

Finally, this year will see the first ever Medway Design and Regeneration Awards to celebrate the past 10 years of new development and regeneration in Medway.

Medway Council is seeking your thoughts on which buildings and developments you think deserve an accolade.

Do you think a local building or project completed in the last decade should be awarded? Nominations are welcome from the design, development and regeneration sectors and from members of the public.

You can find out more here over on the Medway Council site.

Home-Share has been receiving a number of glowing testimonials from landlords recently, which you can see over on the Home-Share Facebook page. I would of course be happy to hear from you, or anyone you know, for giving advice on anything to do with lettings and property.

And feel free to join the Property Investors in Medway Facebook group, which is a great place for landlords and investors of Medway to swap tips and strategies together, as well as sharing networking opportunities.